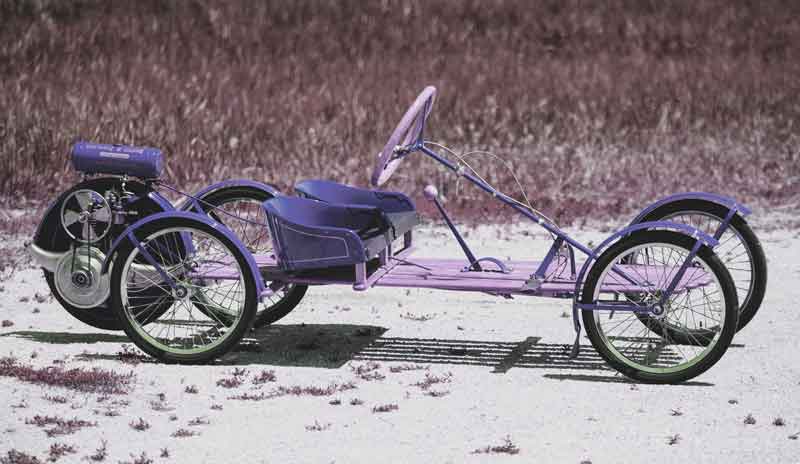 Could the Briggs & Stratton Flyer really be described as a car? Well if the Sinclair C5 qualifies, then I suppose this does too, although it was probably closer to a soap box on wheels or a primitive go-kart. It shared other attributes with the C5; such as a complete lack of protection for the driver and passenger from collisions, exhaust fumes from other vehicles and the weather.

Was it powerful? Thankfully, no. The two horsepower rear mounted engine could just about push it to 30 mph; this was perhaps why the manufacturers didn't bother to include a decent braking system.

It had two wheels at the front, two at the back plus an extra 5th one that actually drove the contraption. This was first of all raised from the ground by means of a lever; the engine, which drove this fifth wheel, could then be started and then it was to be lowered gently onto the ground. Bearing in mind that this engine ran at a constant RPM this could no doubt lead to some very interesting jump starts.

There was no clutch or, indeed, throttle but there was a braking system of sorts; by pressing on a bar the front bumper could be pushed down onto the front wheels. Controlling the speed of this device was quite simple really; you apply various pressures to the rim of the front wheel whilst simultaneously lifting the engine – driven fifth wheel up and down, on and off the road whilst simultaneously attempting to steer it. it is perhaps very fortunate that there was little other traffic on the road in those days; life was never boring for a Flyer driver.

Suspension was hardly state-of-the-art; it consisted of any springiness of the pieces of timber which made up the 'chassis'. Weather protection was provided by whatever coats and hats the occupants were wearing at the time.

Unfortunately we have no records of any nought to 60 times or comments about the vehicle's steering and roadholding, which were undoubtedly exciting to say the least.

The company are of course still in business, specialising in small engine manufacture, so although their initial product may seem crazily suicidal to a modern motorists, at least it was a start and we all have to start somewhere. Who knows, if humans were born with three arms the basic concept of the five wheel system might still exist.

Next - The Peel Trident