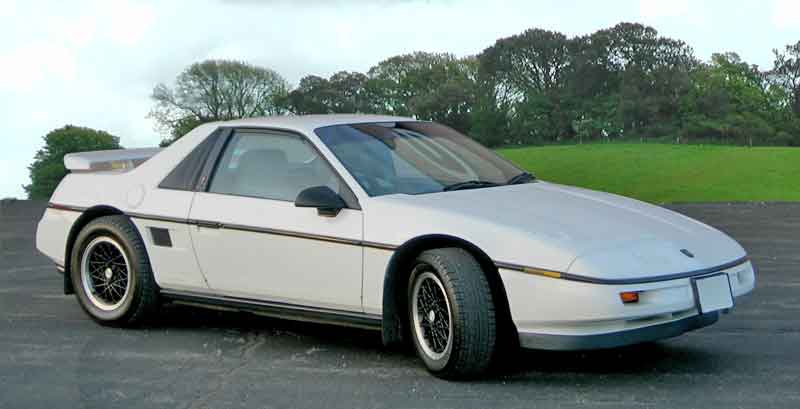 On the face of it the Pontiac Fiero (the word Fiero means not fiery but 'very proud' in Italian, and 'fierce' in Spanish) was a very successful car. It was good looking, exciting to drive, and sales were reasonably good with over 370,000 of them sold over the five years that it was in production. The problem was that early models tended to set on fire.

It was meant to be an affordable sports car. However, in order to save costs a lot of the parts, including the suspension, braking system, tyres and engine came from Pontiac's store of spares for other vehicles such as the Chevette. Perhaps most unfortunate of all was the engine; the existing Iron Duke 14 had been designed as a low revving motor and it was really hopelessly underpowered for what was supposed to be a sports car. Although the mid-engined layout helped to give very good roadholding and handling characteristics, tests showed that the nought to 60 time of 11.3 seconds, and the maximum speed of 105 mph for the base model was uninspiring to say the least. As a result a lot of owners, particularly younger ones, tended to thrash the engine.

What made things interesting was that there were problems with the cooling system; having the engine towards the centre of the car and the radiator at the front could leave bubbles of air in the system unless a special filling routine was followed. Needless to say this sometimes didn't happen. In addition the pipes carrying the coolant were quite exposed and a number of them were known to have been crushed by incorrect hoisting of the car.

To cap It all off a number of engines had faulty con rods. Running the car with a low oil level could cause overheating, and coupled with a suspect cooling system the result was a reported 133 engine fires.

A low oil level was all too common, too; a misprint in the owner's manual stated that the correct amount of oil in the engine should have been 3 quarts, and the dipstick actually confirmed this, when in fact it should have been 4.5 quarts! Add this to the fact that many owners were over revving their engines and it is easy to see why conrods, some of which were imperfectly manufactured, could fail.

There were a number of injuries as a result of these fires, but happily no reported deaths!